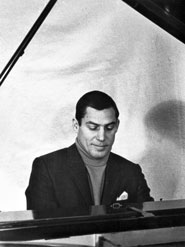 Nicholas Van Slyck was born on October 25, 1922 in Pennsylvania. His father a lawyer, his mother a homemaker. Neither one thought that music was an acceptable life’s work. He did have piano lessons and eventually went to Kent School in Connecticut, an Episcopal affiliated private school without music instruction at that time (It has since developed a fine music program). After some lessons with George Reeves at the Philadelphia Conservatory, Nick went on to Harvard where he became a student of Walter Piston in composition. World War II caused a break in his studies but when his service was over, he returned to Cambridge, graduating in the war-delayed class of 1944.

Nick loved to teach. He found the perfect place-the South End Music Centre in Boston where he became a director in 1950. During those years he also taught at Milton Academy and in 1962 became Director of the Longy School of Music in Cambridge. During that time the Longy Concert Hall was built and connections made with Emerson College so that students could earn a degree as well as receive a professional music education—all the while keeping Longy welcoming and open to lessons for all.

After goal disagreements with the Longy board, Nick founded the New School of Music in Cambridge. It is a community school, serving a complete range of abilities, beginner to advanced,  with the highest musical standards and with a generous financial program.

During this time of music school leadership, he also taught at the Harvard Graduate School of Education, conducted several local orchestras and choral societies (including guest conductor of the Boston Pops), played piano recitals, lecture-recitals and duo-piano recitals with his wife Trudi.

And composed during every spare moment.

The compositions range from orchestra and chorus works to duos and trios for winds and strings. There is an abundance of keyboard music: solo and duo, sonatas, suites, concertos, and unclassified modern works. Some pieces are published, some are in various libraries and all the original manuscripts are stored in the Hans Moldenhauer Archives, Houghton Library, Harvard.

Other libraries that hold fairly large selections of his scores are the Boston Public Library, the New York Public Library Music Department (which holds the complete American Music Center collection when it was transferred to the NYPL), and the Loeb Music Library at Harvard. More music can be found at the Lewis music library (MIT) in Cambridge and the Harvard Musical Association in Boston. Other college libraries throughout the USA hold some Van Slyck music. As always, the internet is helpful in a search.

“Bach’s Second Chance, Origins of the Second Volume of the Well Tempered Clavichord”
from Clavier Magazine, and also is an insert in the Musical Heritage Society recording #834314.
Music reviews for the Boston Globe, Lexington Sentinel among others.

Distinguished Composer Award in 1983 from the National Music Teachers Association.

“Aeons”a piano concerto by Nicholas Van Slyck, was performed for the first time with Nicholas conducting in Salem N.H., followed by a performance at Harvard’s Sanders Theater, paired on that program with the Van Slyck Cello Concerto. Other orchestra appearances include the Boston Pops, the Vermont Symphony, The Merrimack Valley Philharmonic, the Boston Civic Symphony, the U-Mass Chamber Orchestra, the Harvard Club Orchestra, and others.

As soloist Trudi has also performed at the Boston Public Library, Sanders Theater, Harvard University, Kresge Auditorium, M.I.T. The National Gallery of Art in Washington D. C., the Currier Gallery in Manchester, N. H. and the Duxbury Art Complex in Massachusetts and for many solo and chamber music programs at the Gardner Museum in Boston.

Nicholas’ music is known for it’s highly expressive quality, it’s strong structure and it’s unique pianistic sounds that won him the Distinguished Composer Award in 1983 from the National Music Teachers Association. The American Record Guide says that his music is “highly enjoyable with plenty of imagination and color”.

Trudi Van Slyck is on the faculty of the New School of Music in Cambridge, which she helped found with Nicholas and others in 1976, and maintains a private studio at her home in Cambridge.

Mr. Van Slyck’s music is available from several publishers, libraries and website stores and also from the this website, www.vanslyckmusic.com.